Where Could a Small Grocery Store Thrive in Ward 8?

The Yes! Organic Market in DC's Fairlawn neighborhood has struggled to survive, and Anacostia's only grocery store recently closed. Why can't grocery stores thrive here? Mainly, economics. But one spot could work. 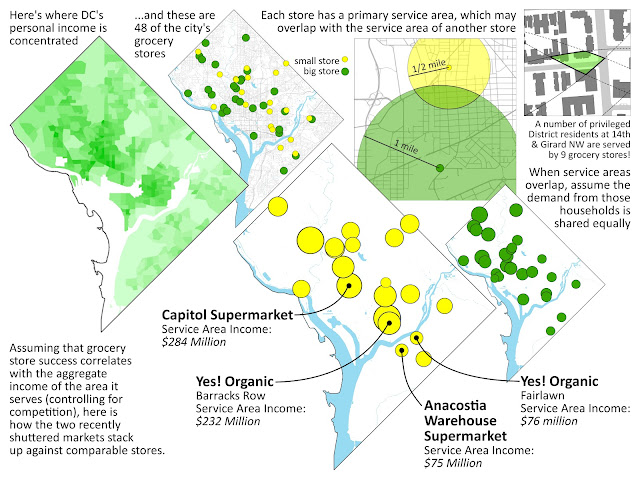 There are many factors that determine the success of a retail enterprise, including marketing, accessibility, visibility, competition, demographics, and location. Yes! Organic may have been difficult to access for westbound drivers, and it could certainly have benefited from an improved outreach campaign, but the fundamental challenge for the store is that it is located in an area with low aggregate income, a result of relatively low household incomes and the presence of relatively few households.

Much of the area around Fairlawn's Yes! is undeveloped (Anacostia Park and River, Fort Dupont Park, etc.), and the developed blocks are low- to medium-density. The graphic above helps illustrate how the purchasing power the store's service area compares with those of other grocery outlets in the city.

The Anacostia Warehouse Supermarket closed its doors because the former owner sold the property. The buyer is optimistic about the site's potential, but in a presentation to the Historic Anacostia Block Association in February of this year, he all but ruled out the possibility of bringing in another grocery store. He said that the potential grocery tenants he spoke with were deterred by the presumed arrival of Walmart at Skyland, just up the street.

Does the eventual presence of two full-service grocery stores at the top of the hill mean that Ward 8's flatland neighborhoods will be forever without their own market? If there is a location best suited for a store to fill the gap, it is at the intersection of Martin Luther King Jr. Ave SE and Howard Rd SE, immediately adjacent to the Anacostia Metrorail station and Metrobus hub, and the meeting point for the Anacostia, Hillsdale, and Barry Farm neighborhoods. 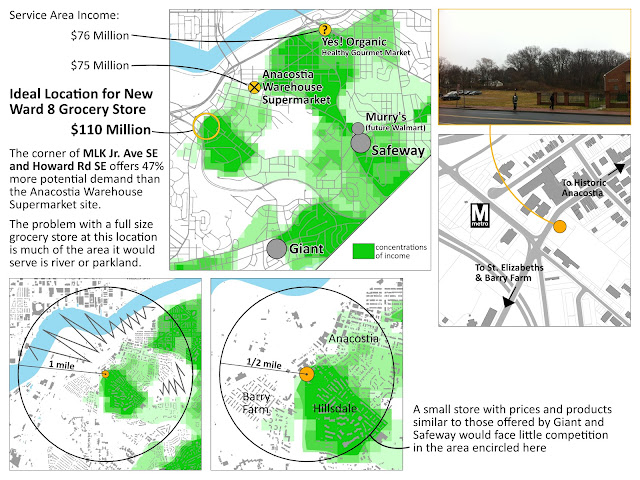 The ideal, and most feasible, site for new development at this intersection is the vast lot owned by Bethlehem Baptist Church, currently used as parking. It is not uncommon for churches, often major landowners, to develop the land they own for a purpose consistent with their mission.

Matthews Memorial Baptist Church, two blocks from Bethlehem, recently oversaw the development of a new affordable housing complex on one of their parcels. Across town, at 10th and G Streets NW, the First Congregational United Church of Christ was part of a redevelopment team that delivered a new facility for the church on the ground floors of an office building.

By developing their vacant land as housing, office space, or a community or spiritual facility, with ground floor retail including a grocery store to replace the shuttered Anacostia Warehouse Supermarket, Bethlehem Baptist Church, and its pastor Reverend James E. Coates, DC's inaugural Ward 8 councilmember, could cement a legacy in the District while doing a huge service to their neighbors in the heart of Ward 8.