Earlier this week, the DC Fiscal Policy Institute (DCFPI) put out their latest report demonstrating how unaffordable housing has become in DC. Chuck Thies tells those burdened by housing costs to suck it up, noting that approximately 60% of the households spending more than half of their income on housing costs are childless singles, who he assumes are wasting their money on Sam Adams and data plans. Yeah, some yupsters probably show up in the data, but I suspect the DCFPI is more concerned with the perpetually poor, whose rents are rising now that there is increased demand for DC's limited housing stock. I'll echo Lydia DePillis' call to affordable housing advocates to pay attention to the effect that excessive land use regulations have on housing costs. Relaxing building height restrictions and eliminating barriers to the construction of housing is a good way to make housing more affordable across the board, even though chances are, the free market will never produce housing in DC that its many impoverished residents can afford, which is why DCFPI's recommendations to increase subsidies for low-income housing production and homeownership are also valid. But more on that later.

DCFPI's report provides a demographic glimpse of who is struggling to afford housing in DC; I wanted to know where those people live. My suspicion was that most would be in neighborhoods where prices have increased sharply over the past decade (e.g. greater Columbia Heights, H Street NE), but wasn't too surprised to learn that my hypothesis was overly simplistic. 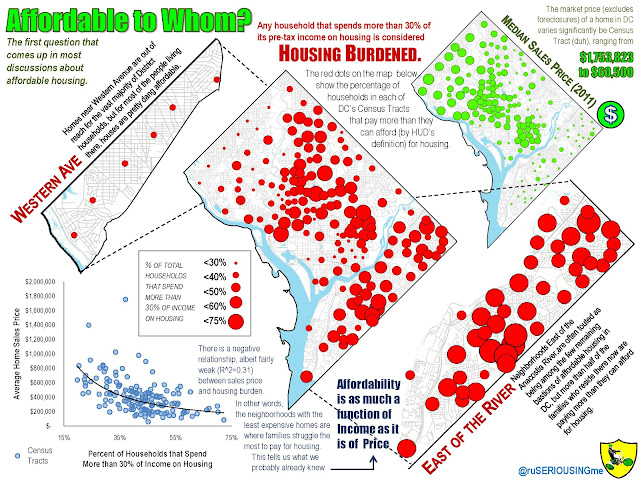