Racial Segregation of the College Educated

Last week in the Washington City Paper, I stated the obvious: DC's neighborhoods are segregated by race. Several readers countered that the root problem is that the city is segregated by class, and this manifests itself as a racial division since DC's rich tend to be White and the poor tend to be Black. That theory is true to an extent, but it misses a lot. Even within the highly educated social class (people over the age of 25 with a bachelors degree or higher), DC and the region appear to be extremely segregated. 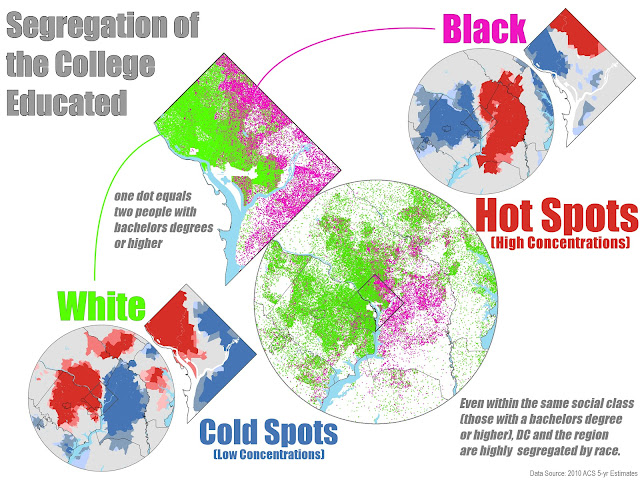 The "Hot Spots" (and "Cold Spots") depicted above in red and blue are the result of complex a spatial-statistical analysis/magic trick done in ArcGIS that I don't fully understand the mechanics of, but I do know how to interpret it:
Mathematically, there is no reason that these clusters can't occupy the same space. In a racially integrated but socially segregated environment, you would find highly educated whites and blacks in the same census tracts. Clearly this is not the norm in the DMV.

To be fair, there are some places where White and Black college grads live side by side: 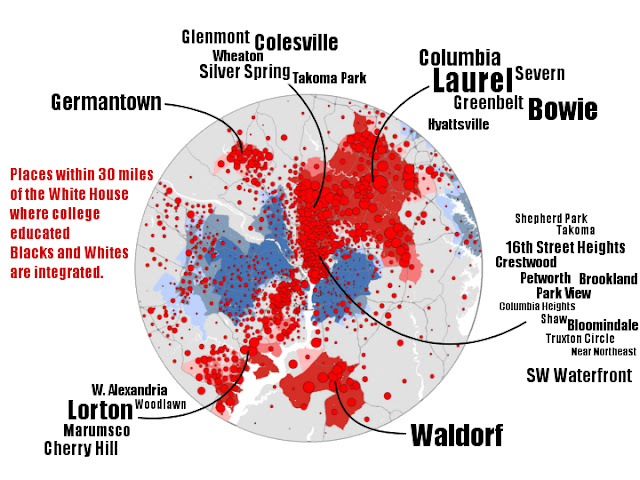 Chances are, few clusters in the country can boast such a diverse population of highly educated residents as the places listed here, so we've got that going for us. But there's too much blue.

DC's (and America's) segregation problem is social, economic, and racial, all at the same time. And as a number of commenters noted, the real question is what can we do about it?
Posted by Anonymous at 9:08 PM