Ward 8 Councilman Marion Barry said some stuff last week that angered anyone in his or her right mind. If there's an upside, it's that the statement triggered thoughtful responses on topics including race relations and economic justice. A much more mundane issue that I wish to explore here is that many people who live or spend time in Ward 8 think that the available food options suck. 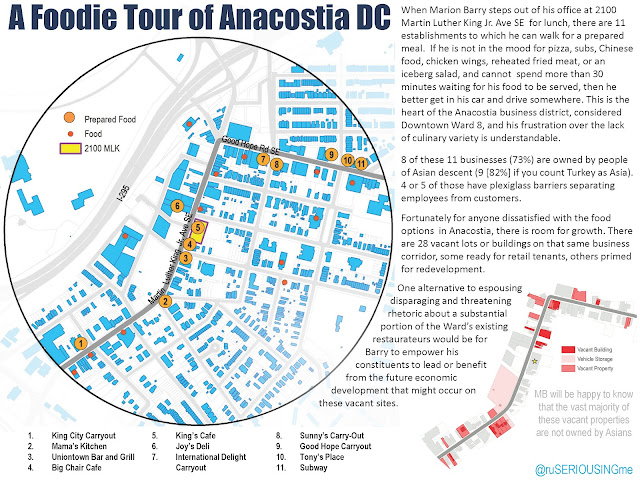 There are lots of places that serve food in Ward 8. The problem is that many of them are school cafeterias, gas stations, corner stores, or warehouses that sell products to stock vending machines. Of the remainder, most are "delicatessens" - the Department of Health's fancy way of referring to what everyone else calls a carryout. There are 8 delicatessens/carryouts/mumbo-sauce-dispensaries owned by Asians within walking distance of Barry's office in Anacostia. If that bothers you, then you are a racist. However, if the fact that there are only 2 black-owned restaurants (a number that recently decreased from 4) in Downtown Ward 8 doesn't concern you, then you probably shouldn't expect to be elected to public office in the 94% African-American jurisdiction.

Anacostia is sparsely populated and its average resident is relatively low-income. This combination does not generate a competitive, varied retail market. Those who are dependent on the few restaurants that do exist get the shaft, because they pay the same price as they would in a market with a broader consumer base but for an inferior quality meal. Hopefully Barry and others whose gears this situation grinds will pursue more reasonable solutions than the one he proposed on Wednesday.
Posted by Anonymous at 2:43 AM
Labels: Anacostia, Asians, Carryout, GIS, Marion Barry, Restaurants, Retail, Ward 8