How the Other Half Lives

Of all the baloney terms that get thrown around in planning meetings, "neighborhood character" might be my least favorite. Part of DC's "character" (I refuse to say it without quotation marks) is that it is racially and economically segregated, and is increasingly unaffordable to the average mortal. Any policy or tradition that reinforces this disgraceful reality should be revisited. 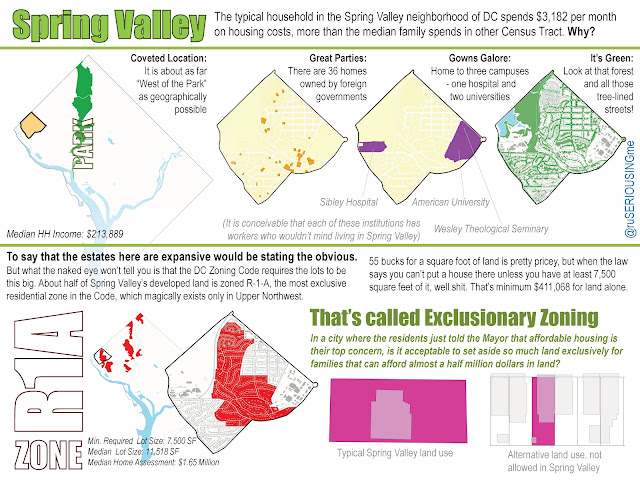 DC is a place where people want to live. There are jobs, universities, and plenty of cultural and recreational attractions. It is the type of diverse and stimulating environment that fosters innovation and tolerance, and we as a city should embrace anyone who wants to call the District home. And yet many of our policies impede the supply of housing from responding to the high demand in a way that might make housing more affordable.

Why can't you and 5 families buy a piece of land in Spring Valley and split it into 6 smaller, less expensive pieces and build 6 separate houses? Because that is incompatible with the "neighborhood character." Why can't a non-profit organization buy a property there and build subsidized apartments for low income families? Because apartments would negatively alter the "urban fabric." Apparently there is something inherently wrong with putting anything other than a mansion next to a mansion, because almost all zoning codes prohibit the mixing of uses and building typologies on the majority of the land under their jurisdiction.