If you haven't heard an aspiring (or sitting) elected official in DC hype Transit Oriented Development (TOD), then you haven't been paying enough attention. And you certainly have not spent much time around city planners, for whom this buzz word is gospel.

DC is growing, and for the most part, that has people excited. The TOD philosophy professes that the majority of the new homes, workplaces, and amenities that are built to accommodate this growth should be located within walking distance of a metro station. Whether the DC of the future has 700,000 residents or 1.5 million, taking public transportation will be an increasingly attractive option if for no other reason than that the convenience of driving will decline; roads will be more congested and parking will be more expensive (unless prices are artificially suppressed at the expense of everything else). In other words, we won't all fit unless we travel more efficiently.

A companion term to TOD, which gets just about as much play from public administrators trying to sound savvy, is Mixed-Use. Land uses that generate lots of human activity (think retail, housing, offices) should be clustered together so that you don't have to waste unnecessary time (or emit pollutants) traveling between your daily activities, and so that there is a critical mass of activity to support infrastructure investments, whether public (metro) or private (restaurants and grocery stores).

If you live within walking distance of your job, then lucky you. But you probably don't. The next best thing (sorry cyclists) is to live near a metro station and to work near a different metro station, so you can get between the two using only one mode of transportation. Most of DC's jobs are located close to metro stations, but too much of its housing is not. The market and public policy have started to recognize this problem and a big percentage of new housing is being built close to transit stations and more densely concentrated than the norm (see Columbia Heights).

DC's population density is 9,856.5 people per square mile. From the perspective of mixed-use TOD advocates, there is really no excuse for a Metro station area to have a population density lower than the city average. And yet, there are 28 stations in DC or on the border that are below 9,856.5 residents per square mile. The worst offenders (Smithsonian, Federal Triangle, the Farraguts, L'Enfant, Metro Center...) are all in the Central Business District where office demand outbids residential for the limited space available, explaining the low population density, but the stations in the next-lowest tier (Fort Totten, Southern Avenue, Brookland, Anacostia) are located in predominantly residential neighborhoods. See the full list of stations below: 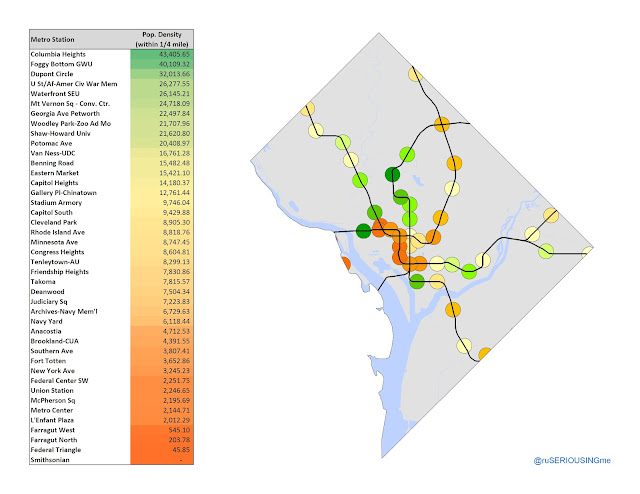 To maximize the utility of the Metro system, much of DC's future growth must occur around these underutilized stations (assuming land use restrictions on the city core aren't loosened). Over the weekend I am going to begin to look at how neighborhoods around the Anacostia Metro station might change over the coming years and decades as the surrounding population density increases. In the meantime, I wanted to share this data with anyone who might find it interesting.
Posted by Anonymous at 1:41 PM
Labels: Anacostia, Anacostia Metro, DC, Density, GIS, Housing, Jobs, Metro, Mixed-Use, TOD