Close to completing this latest graphic, I took a break to catch up on my reading and encountered a @housingcomplex post informing me that my breaking analysis was 6 months late: See the original story via @lizfarmerDC. Oops.

Well, Latino migration patterns within DC are interesting story worth retelling and expanding on. Here's my version: 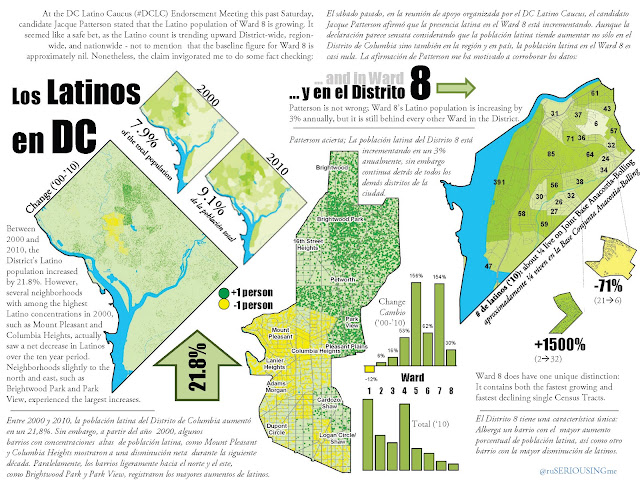 For me, the real story here is what is happening in Ward 7. A shift from Ward 1 to neighboring Wards 4 and 5 makes perfect sense, but why are so many Latinos moving to Ward 7? Is it a combination of the availability of affordable housing and proximity to Prince George's County's Latino concentrations? Please share your hypotheses in the comments. I hope to do some more research on this soon.

You will uncover many interesting nuggets if you dig deeper into the Census data. For example, take a look at the breakdown of the Latino population by national origin: 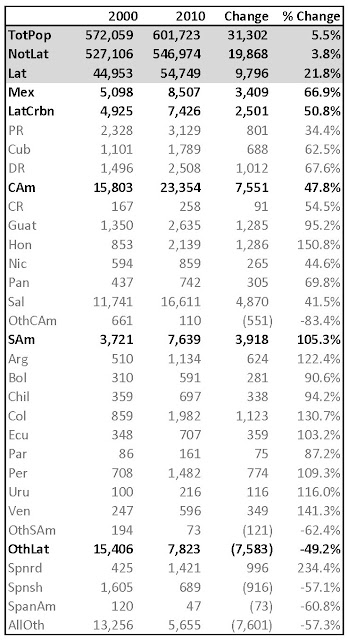 Why did 900+ Iberians start identifying themselves as "Spaniards" ten years after calling themselves "Spanish?" Is there even a difference?

Except this Spain-related anomoly, all the groups that had a decline in population were "Others": i.e. "Other Central American," "Other South American," or "All Other Other." Who are these others? I believe all Spanish-speaking countries in Latin America are included on this list. Perhaps speakers of other Latin-derived languages  (i.e. Brazilians, Haitians, French Guianans) in the region identified as Latino even though the Census tells them not to. (As an aside, the Eurocentric Census definition of "Hispanic or Latino" is cringe-worthy - "A person of ... Spanish culture or origin, regardless of race" - in that it blatantly ignores the complex multiculturalism of the region. I'm sure @CarlosQC would be happy to address disputes on this subject.)

So unless there was a mass exodus of Brazilians from DC, chances are that most of the "Others" simply did not identify a specific country of origin in 2000, but did in 2010, potentially due to better education/outreach on behalf of the Census. If that is the case, then a significant portion of the increase for each individual country may be artificial. Even if the country-level statistics are inflated, the relative values can be useful.

The number of DC Latinos from South America increased at a higher rate (105%) than did the number from Mexico (67%), Central America (48%), or the Spanish-speaking Caribbean (51%).Overall, the fastest growing groups are Hondurans and Venezuelans, though several other South American nations are close behind. It would be interesting to see if there is any correlation between these rates and some indicator in the  origin-countries, such as the employment rate, political or economic instability, crime, etc.